Home POLITICS Scared Of 2021, Museveni Becomes Man Of The Ghetto To Match The...

As 2021 draws Closer, seems it won’t business as usual for the NRM chairman and president Yoweri Kaguta Museveni is seeking another term to extend his rule in Uganda to 40 years.

The 75-year-old must be reading from the same script his other fellow long serving presidents like Robert Mugabe, Col Muamar Gaddaffi, Omar-el-Bashir among others who forgot that time will come for them to leave power. This comes at the backdrop of appointing faded singer Butcherman as his adviser on Ghetto matter.

Now that there’s a new kid on the political scene seeking to challenge President Museveni in the forth coming general elections, the old man from Rwakitula is doing the best to march Bobi wine, from registering as a musician now to calling himself “M7 Man of the Ghetto”

According to Bobi Wine, the NRM God father is just desperate of clinging to power even after 34 years yet during his early years, he had a bias on Africa’s president who don’t want to leave power.

VIDEO: Bobi Wine’s Message of Struggle Goes Beyond Boarders, Urges Kenyans to Register As Voters Ahead of General Elections 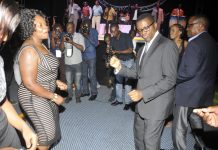